The cryptosphere turned over a leaf of its directory in the bygone year. The new leaf from the directory boasts the diverse sectors such as NFTs, blockchain games, and the metaverse. The digital assets from the sectors have portrayed impeccable returns. One such crypto asset is The Sandbox’s SAND, which boasts an ROI of 9943.88%.

The Sandbox has been enticing not just gamers but marketers from the broader fraternity. Are you seeking guidance on investments in SAND? Look no further, as we decode the plausible price predictions of SAND crypto for 2022 and the years to come.

The Sandbox Price Prediction For 2022

Whilst the asset did build up candles to $4.838 by the 8th of February. Tensity in the industry pushed SAND’s price to its support at $3.36. Hovering closer to the crucial support levels, the asset closed its quarterly trade at $3.395. The second quarter had been rough for SAND, as the broader industry has been under turmoil. The metaverse token lost close to 72% gains in the second quarter.

The price projections of SAND in the third quarter has been fairly bland, as it has ranged in a narrow channel. After visiting the quarter’s peaks at $1.493, the altcoin at the time of press is changing hands at $0.847.

The price of SAND could claim its potential high of $0.92381 by the end of the quarter. The target would seek supplements from events, land sales, partnerships, and celebrity relationships. Whilst the digital asset would find support at average levels of $0.78287. The altcoin could plunge to $0.85651, if negativity strikes its trade.

The fourth quarter could remain crucial for the altcoin, as the social sentiments of marketers would be at the optimistic end. Resulting which the price of SAND could end the annual trade at its potential high of $1.2224. On the flipside, stiffer competition, fight of mainstream cryptocurrencies and negative criticism could drag the price to $0.8736. That said, a steady momentum could land the price at $1.0509.

If The Sandbox picks up 2023 with a positive note, and sees growing user base from the launch of its mobile version. Followed by more games, partnerships, and land sales, the price could rise to its potential high of $2.04019.

Whilst usual buy and sell orders could take the price to average target of $1.5401. Negative social sentiments and volatility in the market could drag the price to $1.0795.

The Sandbox Coin Price Prediction For 2024 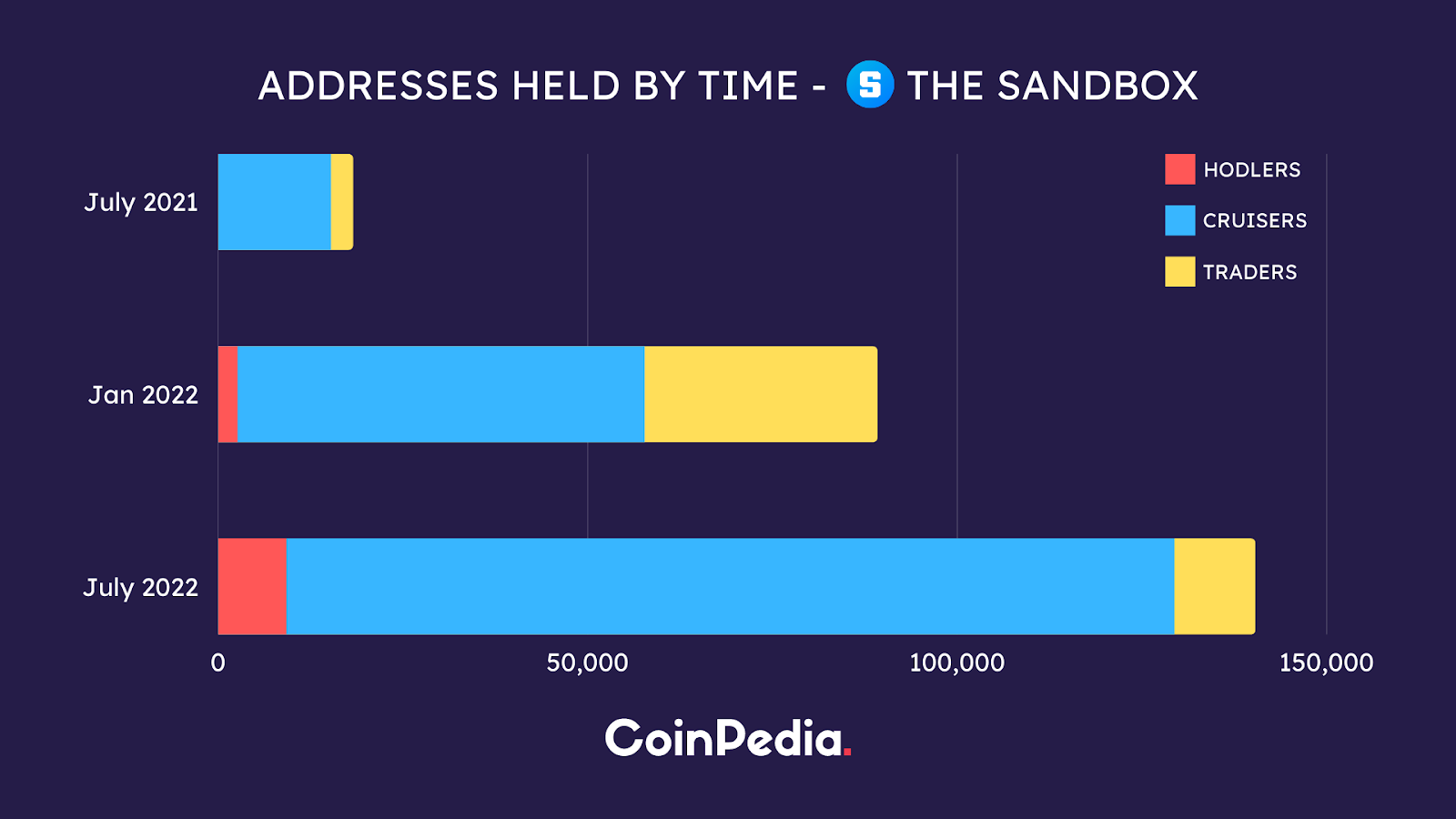 Learning from the graphical representation, whilst the count of hodlers and cruisers has been rising steadily. That of traders has been on a decline. Successively, the rise of long-term investors could push SAND’s price to $3.2526. On the flip side, it could take a plunge to $1.72043. Successively, considering the bullish and bearish targets the regular price might find its base at $2.4715.

The Sandbox (SAND) Price Prediction For 2025

It is known to the masses that the crypto-verse has been taking giant strides towards diverse sectors. As NFTs, blockchain based games, and metaverse thrives over the years. The Sandbox would glorify further. Moreover, if the planned updates materialize as per the whitepaper. Then the price could hit its potential high of $5.2758, by the end of 2025.

On the contrary, if the network fails to captivate the traction of the user base. And falls prey to widespread conjectures, the bears may easily take over. In such a case the SAND price may plummet to $2.82202. That said, with regular buy and sell orders the price could settle at $4.02662.

Click here to read our price prediction of Decentraland’s MANA!

What Is The Sandbox (SAND)?

The Sandbox has been a blockchain-backed virtual space where users can play, create, buy, sell and monetize their gaming experiences. The motive of the platform is to unleash players’ creativity by allowing them to build the platform of their vision.

The Sandbox metaverse world has been deployed on top of the Ethereum blockchain. It makes use of the PoS (Proof-of-Stake) consensus mechanism. However, the platform has its own native token SAND, a classic version of the ERC-20 token.

The Sandbox metaverse facilitates a digital piece of real estate called LAND. The key goal behind the idea is to enable game developers and creators to design and monetize their virtual experiences. In particular, players are allowed to lease and stake on their LANDs. One needs to have SAND in their wallet in order to make purchases.

The Sandbox is a blockchain-backed virtual space where users can play, create, buy, sell, and monetize their gaming experiences. The purpose of the platform is to unleash players’ creativity by allowing them to build the platform of their vision. The project was launched in 2011 by Pixowl, which was founded by Arthur Madrid and Sebastien Borget.   Successively, as per the whitepaper, the vital goal of the platform is to revolutionize the mainstream gaming space with blockchain-backed technology. The metaverse project has been deployed on top of the Ethereum blockchain. It makes use of the PoS (Proof-of-Stake) consensus mechanism. However, the platform has its own native token, SAND, a classic version of the ERC-20 token.   The Sandbox metaverse facilitates a digital piece of real estate called LAND. The objective behind the idea is to enable game developers and creators to design and monetize their virtual experiences. Players can lease and stake on their LANDs in particular. One needs to have sand in their wallet in order to make purchases.

The Sandbox was launched in the year 2011 by Pixowl company. There are two co-founders of the platform Arthur andres madrid 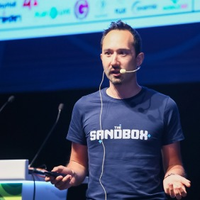 sebastien borget co-founder and ceo at Sandbox Sebastien Borget is a driven businessman who co-founded The Sandbox, serves as its COO, and serves as president of the Blockchain Gaming Alliance. He views himself to be an entrepreneur and the father of mobile gaming because he has 11 years of expertise in mobile gaming and 14 years of experience creating startups. Additionally, he serves as the sandbox game's COO, which is currently owned by Anima Brands. In the year 200, he was elected president of the non-profit blockchain game alliance, which consists of 250 influential business people.   He has a variety of skills, including serving as co-founder and COO at Pixowl, a company that uses gamification, blockchain, and AI technologies and was bought by Animoca Brands. He previously served as COO at Wixi Inc., where he was in charge of the management of every day-to-day business. Currently under development are games like Addams Family Mystery Mansion, Peanuts: Snoopy's Town Tale, Goosebumps Horror Town, etc. for iOS and Android. He has experience with decentralised online gaming. NFTs and blockchain in gaming are being promoted by the president of the blockchain game Alliance. He was a gaming counsellor as well as a co-founder of PIXOWLINC and TSB GAMING LTD. He had positions as project manager at 1-Click Media Networks and chief operating officer at Wixi.com, which was created in 2007. received a Master's degree in Computer Systems Networking and Telecommunications from The Chinese University of Hong Kong, where I also gained extensive knowledge in a variety of other fields. These included game design, mobile devices, business development, management, telecommunications, software project management, and many more. With each successive testing phase, he anticipates continuing to put in significant effort to enhance the Sandbox metaverse. [email protected] EntrepreneurChief Operations OfficerPresident

Followers : 0 View profile . As per their whitepaper, the vital goal of the platform is to revolutionize the mainstream gaming space with blockchain-backed technology.

Furthermore, the platform released the Alpha update in December 2018. And allocated creator funds to incentivize developers for developing items on its blockchain. Initial funding happened in May 2019, the platform has confirmed a $4.5 million seed round. From reputed tech firms including True Global Ventures, Square Enix, and Hashed.

In December 2019, the ecosystem confirmed its first LAND sale featuring a total of 2.5% of the estate. Further, the platform released a Beta version of VoxEdit in February 2020. To drag the traction of a larger user base. The liquidity mining and staking program was launched in September 2020.

The SAND seems to be unstoppable with a series of events lined up for launch. This NFT based platform is the best-suited investment in the current uncertain market scenario. According to Coinpedia’s formulated The Sandbox price prediction. If the network launches the updates such as liquidity mining, staking, and game maker, the price could propel to $1.2.

That said, if the network fails to execute its plan, then the price could sink to $0.85 by the end of 2022. If the digital asset continues to trade as usual without any major swings. The price could settle at average levels of $1.

To read our in-depth price forecast of Ethereum click here!

Is SAND a good investment for higher yields?

SAND could be a profitable investment for the long term, with the future of blockchain traversing across diverse sectors.

What will the maximum price of The Sandbox Crypto be by the end of 2022?

Where to buy The Sandbox crypto?

SAND is available for trade across prominent cryptocurrency exchange platforms such as Binance, KuCoin, Huobi Global, and FTX, amongst others.

What is the All-time-high of SAND?