The market leader Bitcoin has had a tough sail since the start of 2022. The cryptocurrency, after brushing its multi-year lows, is currently being traded between $16,500 – $17,500 in the foreign exchange market. Successively, occurrences such as FED’s interest rate hikes, Russian Invasion, Europe’s vote on PoW chains. An insolvency crisis of Celsius and 3AC, have collectively collared the bitcoin price prediction. Supply chains are evolving with Bitcoin and Blockchain.

With the recent spike in liquidations, coming in light of longs and the equity market’s turmoils. Investors and traders hold cynicism around the short term prospects of Bitcoin price and ethereum price. Are you one of the many, who are keen on Bitcoin’s Price Prediction? Fasten your seatbelts, as this write-up decodes the plausible BTC price prediction 2023 – 2025 and beyond. 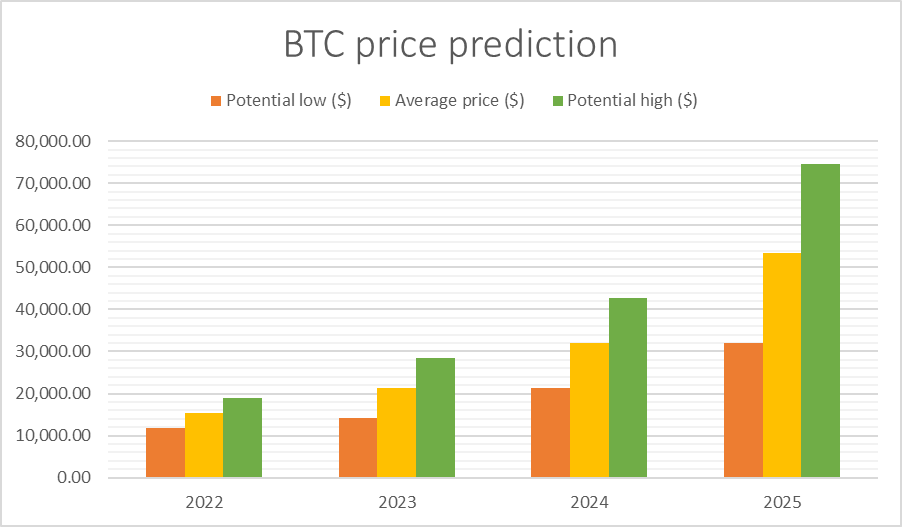 Bitcoin was the first decentralized digital currency to be introduced in the market. Many cryptocurrency work on this Blockchain technology. Bitcoin price has always been a highlight in the industry, its price effect the market valuation in a large volume. Bitcoin price predictions has always been a concern to many individuals including investors. This crypto is also considered to be the spine of crypto verse.

The current situation of the market is not certain, as experts suggest another crypto winter is on the way. The market may take time to recover from this bearish trend. Not much can be expected from it because the market’s volatility is at its peak.

With having a sole mission to create a more economic freedom in the world, Bitcoin has been making progress each day. Bitcoin has many unique properties and working system, which allows its user to make transfers globally and with low processing fees. This new payment system has excited many users and continues to establish itself deeper into the system.

According to Glassnode, the total supply held by holders has reached a new ATH of 13.62 million BTC. A steady rise in volumes could push the bitcoin price to $43,959.19. In contrast, the price of the star crypto could sink to a low of $23,218.00. Successively, a balance in trade activities could settle the price at $34,412.75.

We will be able to see notable changes in scalability, with developments in the taproot. Moreover, this blockchain supply crunch would grow more evident, with the approaching halving event. Wherefore, the price could surge to a maximum of $74,967.47 by the end of 2024.

If Bitcoin manages to diversify and empower its liquidity over the next three years. It holds the possibility to attract more investors, which would result in global recognition. That said, the chances of investments fueled by FOMO would be on the higher side. Prevailing, the bitcoin price could skyrocket to $124,867.54 by the end of 2025.

On the flip side, if the star crypto falls prey to the bears. Owing to criticism coming from the concerns of mining, energy consumption, and regulation, amongst others. The possibility of the BTC price ending the yearly trade at $65,556.29 cannot be ruled out. Consecutively, factoring in the bullish and bearish targets the average price might land at $95,298.65.

According to the formulated Bitcoin price prediction by Coinpedia. Seeking impetus from institutional investments and acceptance. Bitcoin price could propel to a maximum of $25,072.34 by the end of 2022. In contrast, if concerns around PoW chains and energy consumption worsen. We can expect the Bitcoin price to settle at levels around $22,393.85.

Factoring in Bitcoin’s price projections in the past, we can make the assumption that BTC price could probably move sideways for the next two years until 2023. And then initiate a bull run in 2024, which also marks the halving event.

Bitcoin is getting more recognition globally as more and more people have started believing in this technology.

Bitcoin is a digital currency that aims to emerge as an alternative to FIAT across nations. And empower individuals with its decentralized nature and peer-to-peer technology for instant payments. Unlike the traditional financial system, Bitcoin is not controlled by any government or organization, or by individuals. The price of Bitcoin solely depends on its demand and supply.

Since its inception in the year 2008 by an anonymous creator or creators known to the world as Satoshi nakamoto. Bitcoin has taken the digital age by a storm, it also enjoys the title of being the oldest and largest cryptocurrency. Bitcoin’s working relies on a completely decentralized system, making use of its open-source protocol. Which pushes it head-on against the flaws of FIAT.

Bitcoin Organization is organizing bitcoin conferences and events. Bitcoin is an open-source sponsorship-resistant peer-to-peer fixed network. Bitcoin organization is not Bitcoin's official website. Bitcoin has controlled all Bitcoin users around the world. The mission of bitcoin is to give an accurate description of Bitcoin's properties, potential uses, and limitations and improve Bitcoin's worldwide accessibility with internationalization. Bitcoin organization is established by Satoshi Nakamoto and Martti Malmi in the year 2011. The company is placed in San Jose, California.   Bitcoin is the easiest way to transact at a very low cost. The transaction is available in Mobile payments, Security works everywhere, anytime, protecting identity. Its design is public, nobody owns or controls Bitcoin. Bitcoin uses technology to operate with no central authority or banks, They manage transactions and the issuing of bitcoins is carried out by the network. The advantages of Bitcoin org are Peer to peer transactions, World wide transactions, and Low processing fees.

Will Bitcoin follow the projections of gold to claim the title of digital gold?

Bitcoin’s price projections have been following up with that of gold from 1999 to 2011, BTC price could eventually claim the title.

What will the maximum Bitcoin price prediction by the end of 2022?

What price can Bitcoin reach by the end of 2024?