Radical technological developments across the crypto street, have brought vivid advancements, especially in terms of blockchain solutions. In contrast, the Holochain trading platform has been building dApps that don’t oblige the use of blockchain technology.

The native currency of the platform, HOT, received extensive interest from the traders. When it spiked out of the box hitting ATH, in the recent past. Well, with the continued uptrend, do you want to enter the HOT community? Or if you are a holder, want to know how would your investments project?

Then, this write-up aims to cater your queries, with the fundamentals of the Holo chain, historical price movements, market analysis. And predictions for 2022 and the years to come.

Like the majority of the crypto assets, HOLO had commenced the year in a dip and with a price tag of $0.0073. Moving forward, the digital asset took a fall to $0.0056 by the 10th of January. Further, the sell-off in the market brought the altcoin to the oversold regions at $0.0042 by the 22nd of January.

After accumulating in the regions until the 4th of February. The crypto asset took a shot to $0.0063 by the 8th of February. Thereafter, turbulence in the market owing to tense global conditions resulted in HOT taking a downswing. To its multi-month low of $0.0037 by March 14th. After which an increase in buying pressures helped HOT escalate to $0.007244 by the end of the quarter.

If the digital asset attracts the interest of buyers, the bulls might help pose an uptrend. Which could help close the quarter at $0.00413. On the contrary, continuity in prolonged dominance of the bears might slump the price to $0.00235. That said, an equilibrium in trade activities might settle the price at $0.0032.

The fundamental strengths such as lightness, security, and versatility might find newer collaborations, everyday applications around energy grids, and currency designs amongst others. In such a case, the price might propel to its quarterly high of $0.00585.

Conversely, ebbing dominance and failing to keep up its momentum, the price might hit a low of $0.00402. Constrained by a linear price trajectory, the average price might establish grounds at $0.00491.

Prediction Of Holo For Q4

The timely roll-out of upgrades such as HDK 0.10, stable sharded gossiping, warranting, and resource locating, amongst others. Might push the price to $0.008601. However, failing to adhere to its commitments might call for negative criticism, which might dump the price to $0.006116. Considering the bullish and bearish targets, the average price might settle at $0.007166.

If Holochain manages to lure in institutional investments and whale acquisitions. It might help empower the userbase. Wherefore, the price might soar to $0.0165. On the flip side, factors like financial crisis, or regulatory clampdowns might slutch the price down to $0.0092.

Price Prediction Of HOT For 2024

Holo might employ developmental and community building initiatives, which might bring it closer to the spotlight. Growing prominence might stimulate the price to $0.033. In contrast, diminishing initiatives might leave the network with lack-lustre prominence. Resulting in the price crumbling down to $0.0147.

By the end of 2025, HOLO might grow in terms of adoption rate, partnerships, and developments. There is a wide scope that HOLO might succeed in the communication ecosystem. Since, HOLO is a coin for the common internet user. The probability of it growing is much more in comparison to the other cryptocurrencies. Wherefore, HOT might hit a maximum of $0.0656.

In contrast, emerging potential rivals and stiffer competition in the industry might slash the price down to $0.0318. Successively, the average price could find base at $0.0494.

Click here to read our price prediction of Synthetix (SNX)!

What is Holochain (HOT)?

Holochain is an energy-efficient blockchain that develops decentralized Apps eliminating the scalability issues of an existing blockchain. It is a cryptocurrency with the implementation of peer-to-peer networking which offers smart contracts. The platform users can own their own data, control their identity, and can transact without centralized systems. The native currency of the platform, HOT, was launched in 2018.

These ERC-20 tokens are accessible through standard exchanges Uniswap and Binance. Holo is basically designed to bridge the gap between the Holochain platform and the everyday end users. It is a decentralized web platform that uses peer-to-peer networking between users to process agent-centric agreements and consensus processes.

The technology can be used in different areas and that is what makes it such an amazing and unique platform. For transactions between two people within the network, it is not necessary to receive confirmation from network participants and record it on the blockchain. They can create their own chain and make payments within it. 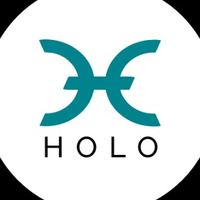 Holochain was launched by Arthur Brock and Eric Harris-Braun, both are skilled contract coders. Both of them have accomplished a MetaCurrency project in December 2016.  Co-founder Arthur Brock has accumulated great knowledge in coding alternative currency systems while servicing. Further, he also accumulated knowledge in Emerging Leader Labs.

As per the predictions of Coinpedia, if Holochain implements developmental and community initiatives, to impart impetus to its community. The price of the cryptocurrency might reach its potential high of $0.008 by the end of 2022. However, uncertainty and FUD could drag the price down to $0.006.

Holochain came into the market over the ICO process that took place between March and April 2018. Over $20 million was raised through this campaign and therefore, it was considered quite a success. Several price variations attested to the success of the Holo HOT launch.

As at the time of the ICO, the Holo token was valued at $0.0001. However a week after the launch, the value of the coin went up to $0.002. And the market cap of the coin was fast reaching one-third of one billion dollars.

The Holochain price surprisingly plummeted immediately and until 2019 came, Holo price ranged between $0.0003-0.0006. Holochain, however, rose a bit and then remained steady on that level.

January 2019 saw a slow start for crypto. However, in April 2020, the price increased a bit. In June Holochain broke its previous price records by reaching an All-Time-High.

The overall performance in the third quarter was not good as Holochain’s price dropped slightly in three months. The value was clinging at $0.001 on July 1 had dropped to the lowest level of $0.0007. The trend line of coins followed a steep path to $0.0006 by the end of December to finish with the 2019’s trade.

In the middle of January 2020, cryptocurrencies experienced growth on another level and haven’t been through any kind of decline lately. The holo coin experienced its peak at $0.0021 and the market cap hit close to $300 million. The exchange rate plummeted once again to $0.0007 and the cap was reduced by more than $100 million.

Having fallen from around $0.0006 in March 2020 to $0.0002. Holo returned to a steady bullish movement until August reaching around $0.0008. Since that point, Holo has been on a steady bearish descent and the price dropped to $0.0004 by mid-November. Later the price steadily started to move up due to the expansion of Bitcoin’s price rally. At the end of 2020, Holochain was trading at $0.0005.

With a slight increase in its price, Holochain was trading at $0.0006 at the start of January 2021. On a bullish note, the price started to grow. The price increased several-fold hitting and breaking ATHs multiple times in the month of March. The price hit Fresh ATH on May 4th, 2021, at $0.03157.

It was hit hard by the Chinese market crisis on May 19th. However, in the second half of the year, it has made two major moves. In the very first cycle, the HOT price broke key resistance to reach $0.01306. While with instant correction, it has clinched and generated a higher high of $0.014 by late August. September had been rough for Holo, as it swung down to $0.0076 by the 29th of the month.

Whilst the crypto asset attempted for a leg-up. However, aggravating downtrend landed the price at $0.0073 by the 19th of December. Following a fake breakout, the trade for 2021 was closed at $0.00749.

Q: What to expect from Holochain in the future?

A: If they gain enough popularity, the coin could be implemented by several companies and app creators because of its practicality and convenient nature.

Q: Is Holochain an open-source protocol?

A: Yes, Holochain is an open-source protocol that uses peer to peer network.

Q: Can Holochain be mined?

A: No, Holochain cannot be mined because nodes on Holochain don’t store and validate the entire Blockchain.

Q: What is HoloFuel?

A: HoloFuel is a Holochain based currency that is a contractual obligation, redeemable for hosting.

Q: What is the difference between Holochain and Holo?

A: Holochain is a data integrity engine in which transactions are immutable and users control their own identity.  Whereas, Holo is a marketplace and distributed hosting platform that allows Holochain application developers to have their applications hosted by Holohosts.