Nicholas Merten, the YouTube Celeb, the entrepreneur, a investor in the crypto industry. He owns the YouTube channel ‘data dash’ has around 300,000 followers and he has occupied a position between Crypto experts like Tom Lee and John McAfee. Mertan tweeted that Bitcoin will go to $50000 in 2018.

Nicholas Merten, has tweeted his opinions and big prediction on bitcoin price to hit $50,000 by the end of year considering its drop downs in the market. However, whenever his shares his opinions or predicts, he can bring changes in trends over his 34,000 followers.

On May 27th, 2018 he predicts on his tweet that Bitcoin is going to hit double of its 2017’s value by 2018. On the note, considering the recent drop downs, Merten has lists four aspects and believes that it will help Bitcoin price up to heights. 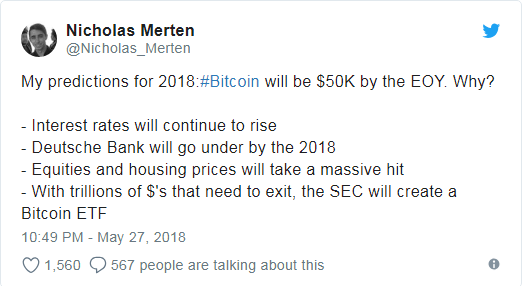 Further, one among his followers, Sammy Tommy have pointed out on his tweet and said,

“interest rates have no correlation with cryptocurrency prices and that though Deutsche Bank is restructuring, there is no way a bank of that size is going under by the end of the year.”

However, another follower asked Merten about the prediction by 2018 crypto market cap, he writes that,

Initially, Merten seems to be seen somewhere between John McAfee an individualist in crypto space and others like Tom Lee and Brain Kelly who always brings traditional aspects on market predictions.

After concerning the dropping in Bitcoin price after the late last year impressive performance, the research head at Fundstrat Global Advisors, Tom Lee has believed that Bitcoin will experience a major height owing to upcoming consensus conference.

Tom Lee has also undertaken the fact by combining bitcoin’s highs and lows situations. It has always given efficient gains during and after previous Consensus conferences. As a result, it is now all set to set for another Bitcoin Rally.

“Already one of the largest crypto conferences in the world, attendance this year is up dramatically. The coming at a time when Bitcoin/Crypto is down YTD. Hence, we expect the Consensus rally to be even larger than past years”.

The CEO and Founder of digital assets investment fund BKCM LLC, Brian Kelly predict that Bitcoin could attain $25000, a new high by this year. Kelly said in an interview with CNBC.

In an interview, Kelly has supported Tim Draper prediction. As he had said Bitcoin hits $250000 by 2022. Meanwhile responding to Draper’s prediction, Kelly said: