MyEtherWallet, largest Ethereum-purse had a hack attack in early hours of Tuesday. According to the source, hackers tried to steal around $150,000 in crypto coin from users’. To do this, hackers used an old and effective technique known as BGP hacking to reconfigure DNS Server and redirected the site to a phishing page.

On Tuesday morning, the Ethereum developer had confirmed that hackers have been redirected DNS server for the MyEtherWallet domain to a phishing page. Meanwhile, many users who were logging in to MyEtherWallet were redirected to a fake site and providing their details to hackers.

One user of MyEtherWallet explained on Reddit about how exactly they lost 0.9 ETH:

“Woke up today, Put my computer on, went on to MyEtherWallet and saw that myetherwallet had an invalid connection certificate in the corner. I thought this was odd. https://i.imgur.com/2x9d7bR.png . So I double checked the url address, triple checked it, went on google, got the url . Used EAL to confirm it wasn’t a phishing site. And even though every part of my body told me not to try and log in, I did. As soon as I log in, there was a countdown for about 10 seconds and A tx was made sending the available money I had on the wallet to another wallet, “0x1d50588C0aa11959A5c28831ce3DC5F1D3120d29”.

Moreover, MyEtherWallet confirms on Twitter that several DNS servers being hacked. The team also said that they are trying to identify a problem and resolves as soon as possible. 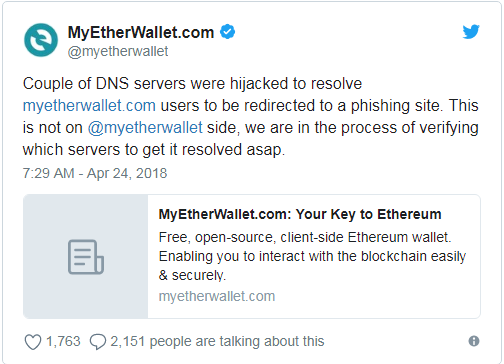 It has been reported that MyEtherWallet users were waiting for the complete details from MEW team. They have been active all day long while many were avoiding security risks by not logging in. Simultaneously, others were running MEW offline and also checks the SSL connection.

On the note, MyEtherWallet has itself confirmed the hack issues this time. However, the problem was affecting only for those users who used the DNS server from Google. Therefore, the team has strongly recommended using the server from Cloudflare.

Additionally, the representatives of Blue Protocol project, recalls the allegations of a DNS hack by indicating a weak level of security. Now they require an apology for insulting their firm reputation.

“It is time to apologize to Blue for this article you uses to salvage your reputation while damaging ours. https://t.co/K7GjyTlSa6 https://t.co/0T673VRMJ0 – Blue Protocol – Securing The Crypto Age (@Blue_Protocol) April 24, 2018”. 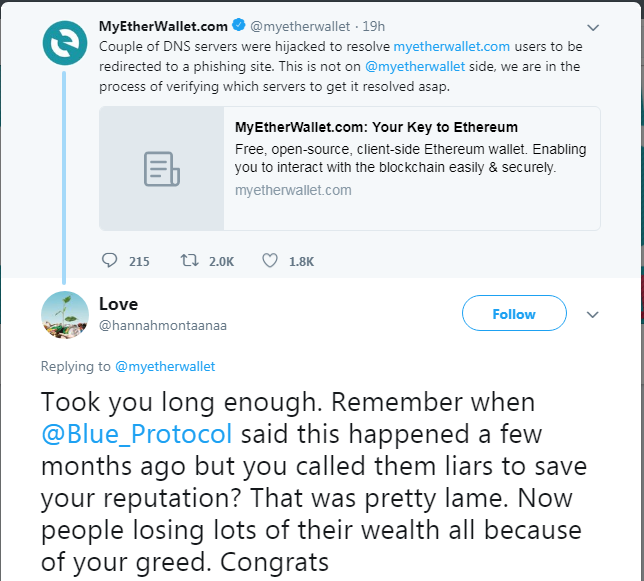 Blue Protocol advised not to use MyEtherWallet.

However, the recent updates on Reddit say that MyEtherWallet developers are not given any green light that the DNS attack has solved. Although, the Google’s Public DNS appears to be resolving to the correct ISP.

With cryptocurrency continues to surge, it also paves the ways for hacking activities. What do you think about MEW hack? Let us know on Twitter.