Recent data share staggering facts and insights about Blockchain Wallet Transactions and rise in crypto usage in July. It claims that the major cryptocurrencies outperformed the other traditional assets. Surprisingly, Crypto outperformed the US dollar as well, claims report.

Despite the vague crypto regulations, the Indian crypto industry is breaking its record. As per the report, there was a significant increase in the blockchain wallet transactions in India. The country ranked second in a list with a 17.4 percent surge. Peru topped with 18.3 percent wheat Indonesia ranked 12.6 percent respectively. 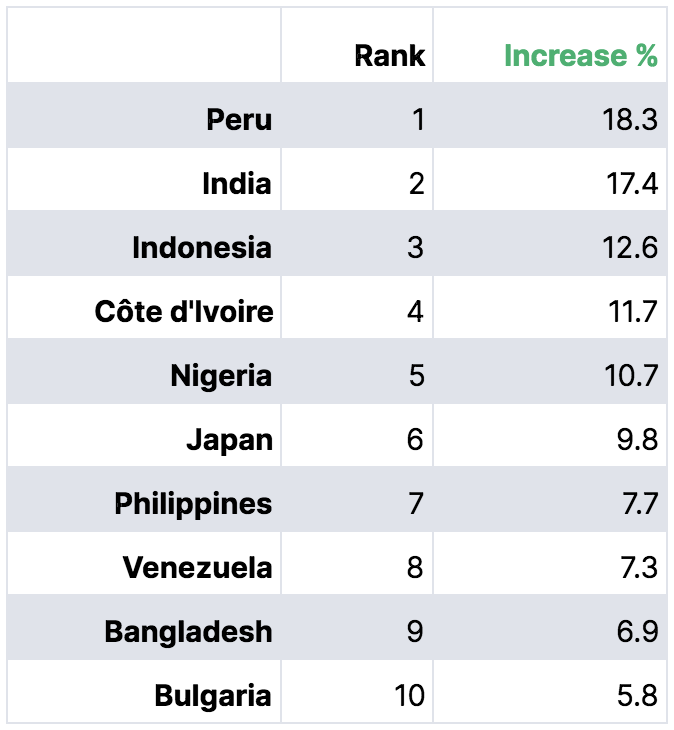 Nigeria is considered as the best-performing countries as it has increased its transaction volume by 60 percent since April 2020. It also accounts for the most interesting nation in bitcoin considering the google search.

On the contrary, countries like Korea, Denmark, Morocco Dominican Republic, Hong Kong, Kenya, Moldova, Brazil, Vietnam, and UAE have recorded a decline in the usage of cryptos for July 2020.

Blockchain.com, a leading block explorer service, and a cryptocurrency wallet released its report of July 2020. According to the new data, the major cryptocurrencies including Bitcoin and Ethereum have surpassed all other traditional assets and also the US dollar.

The highest gainer for July was Ethereum with a change of 57 percent followed by Bitcoin with 24 percent. However, the other traditional assets like gold, S&P 500, EFT gained 11percent, 6 percent, and 4 percent respectively.

The biggest loser of this time is the US dollar, which plunged with a 4 percent decline. This is recorded as the worst figures for the fiat currency in the past 10 years. Some of the major factors highlighted for the downfall of the US dollars are a 33 percent decline in the US economy, the rising COVID-19 infections, and electoral uncertainty.

Amidst the outspread of the talks on high fees and undetermined outstanding supply of Ethereum, a huge 57 percent change has been recorded for the digital asset. This might be due to the increasing trend of Defi.

The mining revenue of digital assets has also skyrocketed, but Ethereum has led the way in the second consecutive month. Ethereum’s mining fee revenue continued to surpass Bitcoin’s revenue for June and July 2020.

Also know – Bitcoin Author’s Response to How Many Ethereums Are There.!

Blockchain.com also presented the on-chain analysis report of Bitcoin. According to the data, bitcoin’s market cap has risen almost 25 percent compared to June 2020. Additionally, the daily number of transactions on blockchain.com and other platforms have also surged significantly.

However, continuing the previous trend, the average fee per transaction has also doubled in July compared to June from $1.28 to $2.43. 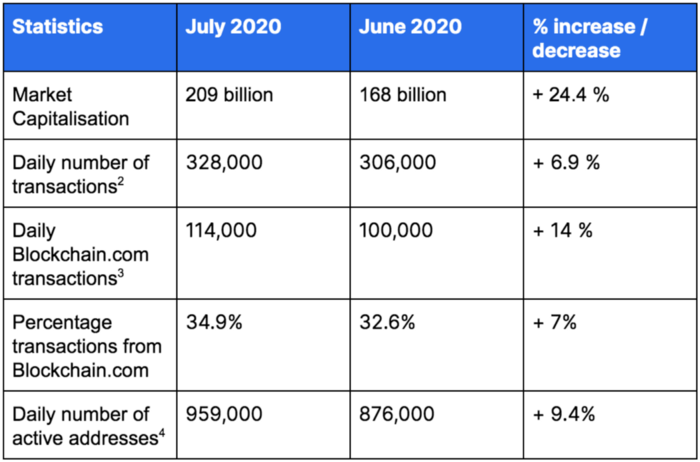 The data also included the Bitcoin ownership distribution, which stated that the number of addresses holding at least 0.1 BTC was up by 0.7 percent whereas the addresses holding one whole BTC had decreased by 0.1 percent.

The blockchain.com data also included the insights of the twitter hack and about the Great Financial crisis(GFC) of 2008. As per the report, the ongoing phase might be termed as the ‘Great Mother of Financial Crisis’ that could be more intense than the GFC 2008.

In a nutshell, the data suggests the growing market cap of the major cryptocurrencies with the increase in the crypto usage and mining fee revenue. Recently, a big Wall Street Company too

Invested heavily in Bitcoin, however, many experts speculate more companies would keep adding due to the decline in the value of the US dollar.

So readers, what’s your take on increased in Blockchain Wallet Transactions? Let’s discuss on Twitter – Tag us @CoinpediaNews

Binance’s Move To Let Go Off $1.6B In LUNA: Genuine Or Just A PR Stunt?

Traders Withdraw $10M Tether USDT, Yet The Firm Claims To Be Strong