Bitcoin, being the most prominent crypto is witnessing a tough competition from the second most-favored crypto, Ethereum. According to a report published by Ryan Watkins, a researcher in Messari Crypto, the public blockchain payments systems have touched the skies this year with the collective transactions of $1.3 trillion. 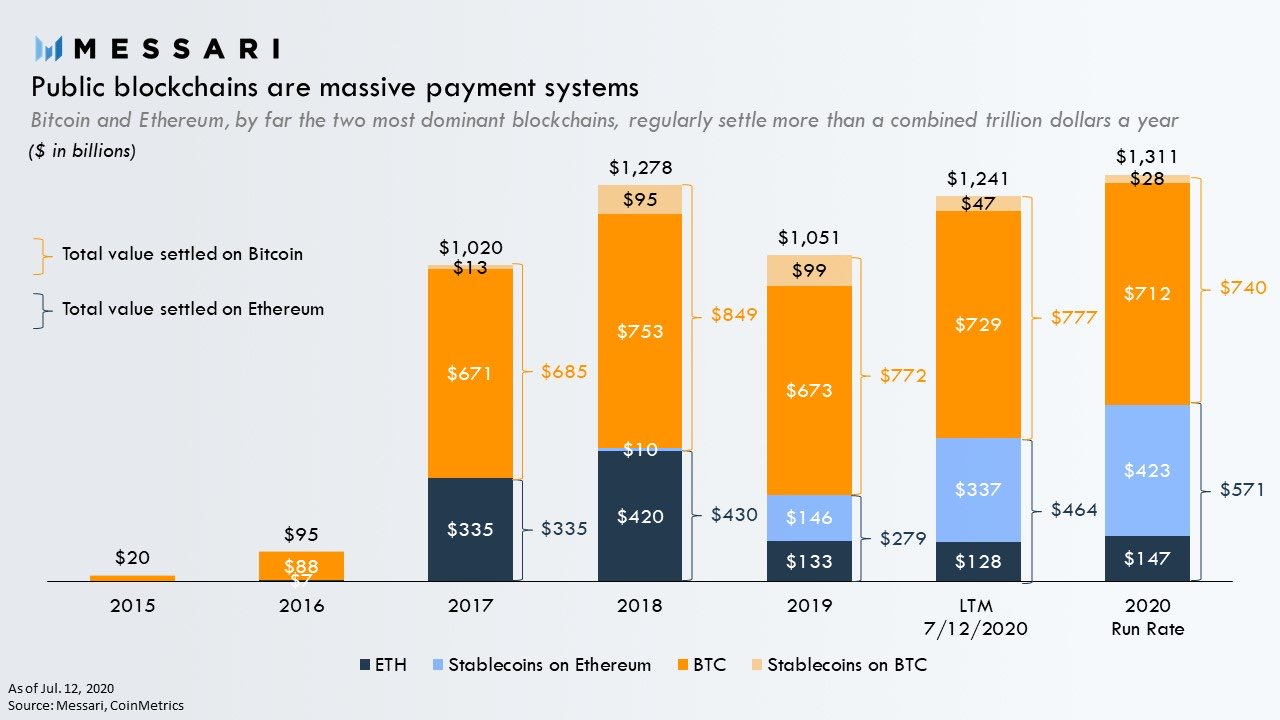 Ryan Watkins also explained that the public blockchain systems based on the Ethereum stablecoins have risen compared to the payments using cryptos like BTC or ETH.

He further adds that the payment system is often compared to the traditional payments with a VISA card or similar but rather they need to be compared with large payment systems like Fedwire or SWIFT transfers etc.

He said, “The typical argument goes, ‘You can’t buy a cup of coffee with Bitcoin’ and ‘cryptocurrencies are too volatile to serve as a medium of exchange’. Both premises aren’t inaccurate, but the conclusion is.”

He further explained that the purpose of the payment systems is to provide complete assurance on the payments that settle immediately, which cannot be reversed, rejected, or sent back without the consent of the recipient.

Also read – Is it Altcoin Season 2020? – these Traders Believe So

Many analysts predict a major revolution in the crypto space. They speculated that Bitcoin could possibly be taken over by another altcoin. Binance CEO, CZ, in an interview said that, in the coming 10 or 20 years, people will look up to something new, more efficient than Bitcoin.

He said, “ Nothing lasts forever. The first search engines are not the ones now, neither the first social media platforms. And also the previous strong companies like IBM, Microsoft are no longer big companies.”

However, he points out that he does not mean to say that Bitcoin will lose its dominance or the fiat will take over the crypto. CZ further elaborates that bitcoin has already passed all the test phases and will be present in the crypto space forever.

He further said that Ethereum based smart contracts could be more preferred than bitcoin payments as Ethereum based payment systems are fast and more reliable.

Moreover, the developers of Ethereum based blockchain are working on more efficient Ethereum payment systems. Hence people would invest in emerging technologies like Ethereum.

Previously, CZ wished to have a decentralized social media platform on Ethereum in conversation with Ethereum founder Vitalik Buterin.

In a nutshell, Ethereum based payment systems demonstrate more stability with less volatility and hence are successfully surging over the years. The upcoming Ethereum 2.0 is anticipated to overcome the shortcomings of the present Ethereum blockchain payment system, making it more fast, secure, and reliable.

Report On What Happened to TerraUSD (UST) Prior to Historic Collapse