Ethereum has been attempting to stay above the critical level at $200. After its April surprise action to $227, the bears crept back compelling Ether down through major support levels at $210 and $200.

Support stabilized at $195 put an end to the selling pressure. And deflected a logical dive under $190 and towards the major support at $170.

Ethereum has been hovering within a measure between $215 and $194 during May 2020. It repelled lower today from the $208 level as it touched $205. However, it is crucial to point out that this is not a push from the ETH bears. But fairly a result of BTC breach above $9,000 again.

Nonetheless, ETH may move upward, but it however, has to confront the resistance at $220 (1.272 Fib Extension) if it wants to proceed.

The RSI propels out above the 50 point as the bulls refuse to give up on their grip of the market propulsion.

Meanwhile, ETH/USD is trading at $206 after slumping over 1.5% to its value on the day. Ether made several attempts to strengthen gains above $210 this week. But the seller contention at $212 did not give the bulls a chance at making a run.

A horizontal trading action appears most likely, particularly with the Relative Strength Index (RSI) which starts to move laterally at the average (50).

However, if the ongoing bullish interest stays put, then there is an opportunity that the price could run through higher as the bull’s intent for a falling wedge pattern escape.

If the Bitcoin price rallies before Monday, Ethereum could also erupt upwards due to the correlation; bonded with the described falling wedge pattern getaway.

On the upside, $240 is the medium-term mark but the potential to hit levels towards $300 is huge, especially in this halving period. 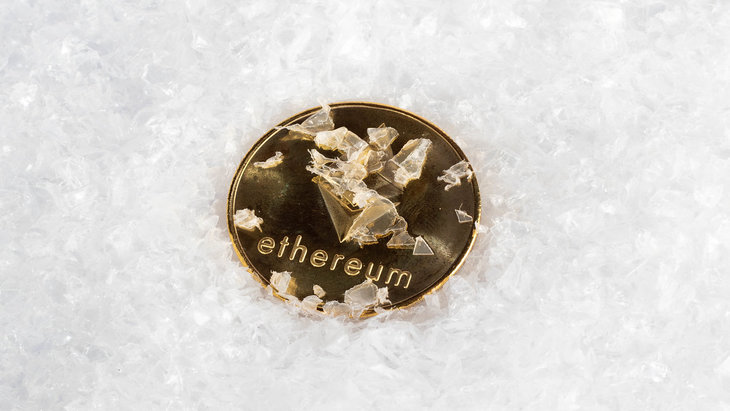 Article Name
Ethereum Price Analysis : ETH Price Decline Towards $200
Description
Ethereum has been attempting to stay above the critical level at $200. After its April surprise action to $227, the bears crept back compelling Ether....
Author
Dare
Publisher Name
https://coinpedia.org/
Publisher Logo