During the late November of the previous year, many of the crypto assets such as bitcoin, Ethereum or Litecoin have fallen to new lows. But, TRON who aimed at decentralizing the web had a solid and steady growth in value. TRON’s positive price action was rightful for BitTorrent token launching on TRON blockchain as TRC-10 token. This also included a major developer conference featuring celebrities like Kobe Bryant and more.

This constant marketing hype and promotions done by justin Sun has earned Sun more followers than Vitalik Buterin. This was something that Justin Sun utilized as an opportunity to rub in Buterin’s face. 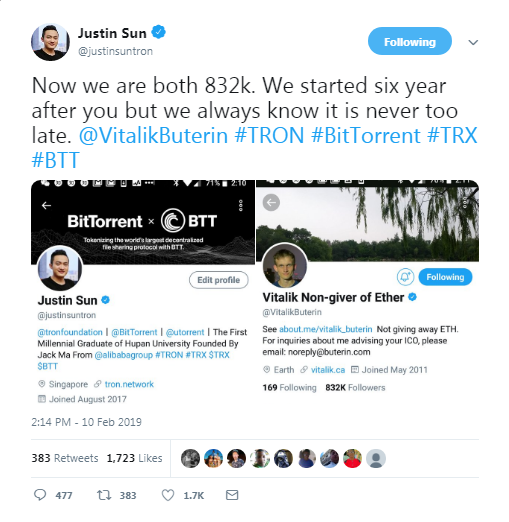 Justin Sun created a Twitter account in August 2017 to promote his cryptocurrency TRON. The founder earned a reputation for making announcements of announcements, which helped him earn a large Twitter following.

Also Buterin’s Twitter account was up in May 2011 and features 3 times the tweets that Sun amassed on Social media soapbox. With this comparison, Sun has all rights to be proud of his increase in followers. Ultimately Sun took the opportunity to rub it in face of Vitalik Buterin, who often speaks against TRON.

Justin Sun has always been receiving many negative remarks from Ethereum creator. No comments were more confrontational than Buterin’s response to Sun’s post of “TRON is better than ETH”. This tweet listed seven potential reasons and following the eighth point buterin said that TRON plagiarized white paper that buterin had personally confined. Since then, the two have repetitively exchanged blows across ‘Crypto Twitter’ without any signs of ceasefire in sight.