US based largest crypto exchange; Coinbase is entering into Japanese market. In order to ‘accelerate the global adoption of cryptocurrency’, the startup firm had a discussion with the Japan’s financial regulator to ensure conformity.

Coinbase is now in Japan too!!!

The San Francisco-based company, which currently operates over 32 countries, has now unveiled its planning to set its new office in Japan. It has a plan to work “hand-in-hand” with the Japan’s Financial Services Agency (FSA). Accordingly Coinbase is also expecting the license from FSA ‘within the year’ The new move was announced in blog posted on Monday, June 4th, 2018 by the Vice President and GM of Coinbase, Dan Romero.

“We plan to take a deliberate approach to our rollout in Japan, which means working hand-in-hand with the Japanese FSA [Financial Services Agency] to ensure compliance with local laws at every stage. As a regulated, compliant crypto company in the U.S.”.

Back in July 2016,  nearly two years ago till date, the Coinbase proposed a plan to enter Japanese market when it has raised $10.5 million from the Bank of Tokyo-Mitsubishi UFJ (BMTU) and Mitsubishi UFJ Financial Group (MUFG).

On top of new office in Japan, the  San-Francisco based firm is also appointing its new CEO, Nao Kitazawa. According to the announcement Nao was former investment banker at Morgan Stanley Japan. Also a member of international law firm of Japan and New York. 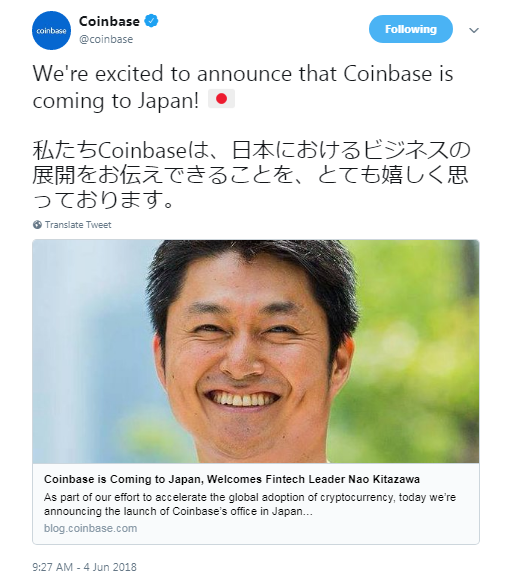 Moreover, the company aims at offering the similar level trust with the customers of Japan. Further company concluded that,

“We look forward to sharing more about our plans for Japan soon”.