The Bank in Argentina is the first bank in the world to allow customers to use bitcoin for cross border payments. It has also revealed its partnership with Bitex, a blockchain-based financial services based in Latin America.

According to the Facebook post, the Bitex, the Latin America exchange startup initiated in 2014 joined with Argentina’s Banco Masventas bank using Bitcoin for a cross border transactions as an alternative to Swift.

The principal shareholder of Masventas, Jose Humberto Dakak, explains that, the approach proposes to fortify the bank’s smartphone and digital based services. He adds it will also helps to reduce the service costs of bank.

“One of the actions was to contract Bitex as a strategic partner in the implementation of the Bitex platform for payments and collections operations for our clients abroad”.

Under the provision of new approach, BMV customers are allowed to send money to 50 different countries. Thus, helps to cut off the transfer times up to 24 hours. Due to security issues and letdowns, BMV moves away from Swift, clearing network used by many banks.

Further, Chief Marketing Officer at Bitex’s, Manuel Beaudroit, this approach marked the first time in the world that the bank using bitcoin for cross-border payments. 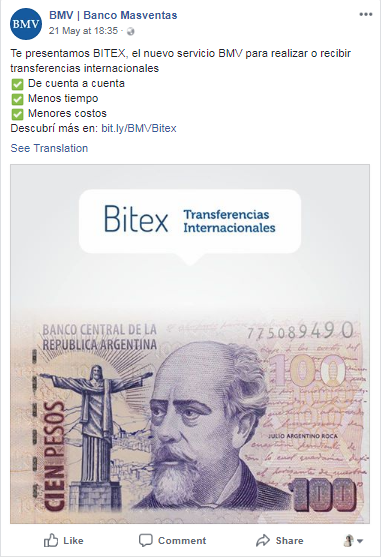 “The customers will ask the bank to do an international payment, and the bank uses Bitex as a provider. For the customer, it’s transparent, they don’t touch, they don’t see the bitcoin. We are a provider for them, and they are not touching bitcoin”.

At the end, if BMV and Bitex payments approach succeeds then Argentina will greatly achieve heights in crypto adoption. Recently, Argentina had to set 4000 Bitcoin ATMs installed, due to changes in legislation.

Previously in month of April, Ripple and Santander will roll out an app that will see the Spanish based banking group offering blockchain–based foreign exchange payments to its customers. Known as One Pay FX, the app will roll out in Spain, the U.K., Brazil, and Poland.

What do you have to say about Argentina’s BMV and Bitex partnership? Success or a Dropouts? Share your views with us on Twitter and Telegram.