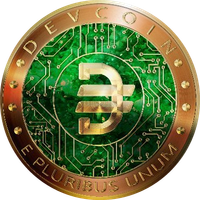 DevCoin is known in market as an ethically inspired cryptocurrency. It was introduces in the year 2011 for providing aide for open source projects. Therefore, the advantages of programmers, , graphic artists, hardware developers, writers, painters and filmmakers worldwide. Therefore, this unique cryptocurrency goes mostly to developer (90%) and only 10% to miners.

Accordingly, DevCoin was introduces in market in the year 2011 and its developers is says by name “Unthinkbit”. The currency is by its pseudonym “The Ethical Currency,” and the motto in development of this coin was “From the many, one” and “From one, the source.”

Accordingly, from its initial inception it was establishes as a cooperative pool to help its users in earning a living wage. Henceforth, this internet currency is on source code as well as mining algorithm used by BitCoin, but this is the only similarity between these two cryptocurrencies, e.g. BitCoin and DevCoin.

However, the uniqueness of this coin is that it is not purchasing goods and services. It works as a collective pool from where developers can draw supplemental income for their work. 90% of the currency generated goes into this developers’ pool.

Therefore, this interment currency is also open for writers, marketers, musicians, artists and filmmakers or their online salary transactions. Investors in this coin are inspires to do so to support the objective, which is expects to open venue for creating new access to more open-source software, books, music, art, and films.

90% of DevCoin generation goes to open source projects with bounties for accomplishments and regular payments for active developers. Moreover, developers obtain this coin by developing, Writers receive Devcoins by writing, marketers earn the coins by marketing, and administrators can earn the coin by helping to administer the this coin project.

Therefore, the coin are stored in the DevCoin wallet – these e-wallets are free, open source software, available for FreeBSD, Linux, Windows and Mac.