In the early hours today, the world’s first cryptocurrency, Bitcoin, was trading near $24,000 before a slight pullback. The overall crypto market has reclaimed the bullish momentum with a surge of 5.71%, now trading at 1 trillion.

This favorable push has helped the flagship currency’s Crypto Fear and Greed Index to signal “just fearful” – a change from the previous “extremely fearful.”

The Fear and Greed Index is an indicator that measures the overall market sentiment and gives a score between 0 to 100. The index gives its verdict based on the Bitcoin market’s volatility, volume and dominance, social media trend, surveys along with research information.

Per Santiment’s data posted on Twitter, market participants are flipping their stance on short-term trading and moving towards a long-term breakout of the King currency.

The Santiment data also reveals that the funding rate for Bitcoin on exchanges has surged to its peak over the last two months. This is due to the asset’s increase in price beyond $23,600, which might point to Fear of Missing Out (FOMO). 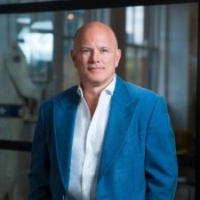 Followers : 0 View profile , ‘s CEO, predicts Bitcoin to trade beyond $500,000 in the next 5 years. He claims that the institutions that did not enter earlier are seeing this as an opportunity. Also, Mike believes that whatever the worst was to happen has happened; now, we should rebuild.

On the contrary, Perspective data by Grayscale indicates that the present bear market won’t see an end until another 250 days.